Abstract: The success of deep neural networks (DNNs) from Machine Learning (ML) has inspired domain specific architectures (DSAs) for them. Google’s first generation DSA offered 50x improvement over conventional architectures for ML inference in 2015. Google next built the first production DSA supercomputer for the much harder problem of training. Subsequent generations greatly improved performance of both phases. We start with ten lessons learned from such efforts.

The rapid growth of DNNs rightfully raised concerns about their carbon footprint. The second part of the talk identifies the “4Ms” (Model, Machine, Mechanization, Map) that, if optimized, can reduce ML training energy by up to 100x and carbon emissions up to 1000x. By improving the 4Ms, ML held steady at <15% of Google’s total energy use despite it consuming ~75% of its floating point operations. With continuing focus on the 4Ms, we can realize the amazing potential of ML to positively impact many fields in a sustainable way.

Bio: David Patterson received BA, MS, and PhD degrees from UCLA. He is a UC Berkeley Pardee professor emeritus, a Google distinguished engineer since 2016, the RIOS Laboratory Director, and the RISC-V International Vice-Chair.
His most influential Berkeley projects likely were RISC and RAID. He received service awards for his roles as ACM President, Berkeley CS Division Chair, and CRA Chair and awards for his teaching. The most prominent of his seven co-authored books is Computer Architecture: A Quantitative Approach.

Outside of work he plays soccer, lifts weights, cycles, and bodysurfs. He has been married to his high-school sweetheart since 1967, and they have raised two sons, who in turn are raising three grandchildren. 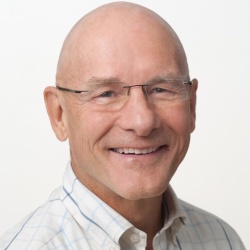